Hydrogen is of critical importance with regard to Germany's climate protection targets, among other reasons based on three aspects:

1. Hydrogen is producible and is therefore not only the most abundant element in the universe, it is also nearly non-exhaustible.

2. Hydrogen has a high energy density and consequently can reduce fuel consumption in the industrial and mobility sectors in a cost-efficient form.

3. Hydrogen is excellent for storage.

Depending on the production process, however, the hydrogen produced has a very different energy balance. Some with extensive ecological effects - which makes most manufacturing variants unsustainable from our point of view.

A distinction is made between black, brown, gray, blue, turquoise, orange, white, red or green hydrogen. In the following we explain what the different colors are all about and which method is currently the most sustainable to produce hydrogen.

Gray hydrogen is produced by steam reforming of coal or natural gas. The fossil fuels are converted into hydrogen and CO2 using heat, while the resulting emissions are released back into the atmosphere unused and burden the climate.

Naturally occurring hydrogen, e.g. in rock formations in Africa (Fraunhofer IEE study), is referred to as white hydrogen. This form of hydrogen can be made usable by fracking. However, since the environmental impact of fracking is almost unknown, this category of hydrogen is considered to be highly controversial.

Red hydrogen is produced from nuclear energy. On the one hand, „by using electricity through electrolysis, and on the other hand, by using its high-temperature wastewater via the TWS process.“ The latter uses high-temperature heat (e.g., solar and nuclear waste heat) to produce hydrogen from water. The main disadvantage here is the mining of the required uranium, as the radioactive element is also non-renewable in addition to its hazardous radiation.

Orange hydrogen is produced using biomass and is present in organic forms such as accumulating municipal waste. Although CO2 is released again after the usage of orange hydrogen, it is nevertheless more harmless to the environment than hydrogen produced from fossil fuels. However, orange hydrogen does not appear to be very suitable for mass production, as deforestation, land scarcity and the impact on water resources, among other things, are major points of criticism.

The process of methane pyrolysis generates turquoise hydrogen. In this way, natural gas can be separated into hydrogen and solid carbon. Even though CO2 is not produced directly in this process, the required and likewise expensive extraction of natural gas as a basis for this process is a disadvantage.

Using electrolysis, a water molecule can be split into hydrogen and oxygen. This method is green because only electricity from renewable sources is used. In the long term, this is the only sustainable way of generating hydrogen.

We at Graebener® strongly agree that the future belongs above all to green-produced hydrogen. This is the reason why we are investing in the development of high-perfomance production technology for bipolar plates, which are also used in electrolysers to convert electricity from renewable sources into hydrogen and store it. 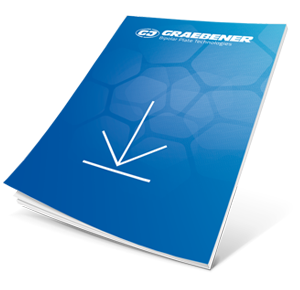